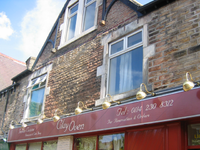 The Treehouse was a six-bedroom rented flat near the Fulwood district of Sheffield, South Yorkshire, United Kingdom. The flat was situated on the upper two floors of the Clay Oven restaurant on the edge of Bingham Park. Between July 2002 and July 2004 it was occupied by a group of furries and two of their non-fur friends.

The following furs were residents of the house for the entirety of the two year lease:

Additionally, The Treehouse was home to the following furs for varying amounts of time during the two years:

Two non-fur friends of the residents, Gina and Duncan, also lived at The Treehouse for periods of time.

The flat had a fairly open-door policy on visitors staying over, and it was common for furries from around the UK and abroad to stay for days, weeks or even months while visiting the area.

In July 2004 the furry residents of the house decided to move on, with Duncan staying behind to continue the lease with other friends. ForFoxSake, Kittiah and Fleet moved into a new house together.

It remains slightly unclear as to who originally named the flat "The Treehouse", although it almost certainly stems from the fact that the rear windows of the house overlooked Bingham Park and were at tree-top level. Regardless, the name caught on and remains used by former residents and visitors to the house alike.