The series Tales of Beatrix running three issues and subsequent short subjects tell the story of Beatrix Farmer, an ordinary rabbit girl in the wrong place, at the wrong time when she was fatally wounded in from a drive-by shooting. Rescued by omnipotent beings only she can see, they ensure her future safety by wrapping her in a suit that confers invulnerability. Only later does she discover it is also completely safe from bodily needs -- food, drink, sleep, sex, and in fact she has no sense of touch, taste, or smell. Forced into the role of superhero for hire, Beatrix yearns to be ordinary again or at least have the option of removing the suit when desired.

The character was created by Steve Gallacci (Albedo) and later drawn by Taral Wayne. The title was published from 1996 to 1998 by Mu Press, Vision Comics, & Shanda Fantasy Arts.

Beatrix Farmer was created by Steve Gallacci. In 1995 the full length comic was published by Mu Press. The "origin" issue was illustrated throughout by Taral Wayne, and written mainly by Steve with some tinkering by Taral.

Bea, otherwise a very normal and well-adjusted young girl, became a reluctant superhero as a result of extra-dimensional intervention. Saved from being "collateral damage" during a drive-by shooting, she finds herself clothed in a gaudy jumpsuit that confers invulnerability on her. The catch -- it won't come off, and it negates the need to eat, drink, sleep or engage in other ordinary functions (like sex). Beatrix is understandably not thrilled by the situation, or eager to fight crime for a paycheck every week. 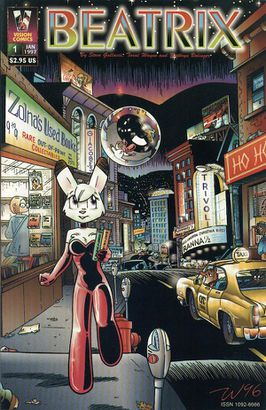 The first issue was reprinted in full colour by Vision Comics two years later, and a subsequent second issue followed a short time after, (written and illustrated by Taral). A short Beatrix story appeared in Valiant Varmints in 1998. As well as the superhero stories, there were a small number of pre-suit short pieces, one illustrated by Taral, a second by Steve Gallacci, and two others by Terrie Smith. While Taral had plans for other stories, miserable sales in the aftermath of Marvel's bankruptcy put the kibosh on them. (Ten bucks a page do not a career in comics make.)