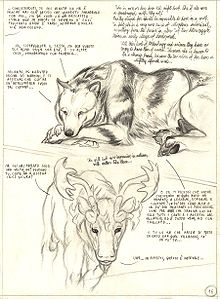 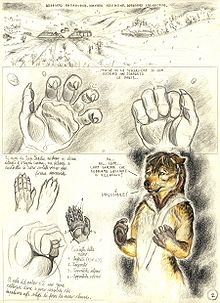 The Synetai Chronicles is a comic by Scale, an Italian artist mostly known for his realistic and accurate way to depict anthropomorphic animals. It was published on Scale's "Snow Covered" website between 2004 and 2006, and in 2010 August it seems to be on a permanent hiatus.

It followed the life of young wolf Adelo, forced to leave his land in the country, to live in the city of Ebenos amongst other wolves and reindeers.

In the world of the Synetai Chronicles, wolves and reindeers are tied together in pairs at birth by a ceremony, forming a strong psychological link, called Syndiateos. Young adelos does not even have a Syndiateos, and this seems to cause his behaviour to be abnormally shy.

In the second episode though, the young wolf appears to be definitely more adapted to his new life, if still a bit awkward at the times. Sadly, the comic publication stopped right after the start of the second chapter.

The comic's panels were quite big and very detailed, often depicting anatomical and atistic studies along with the narration, as shown in the samples.