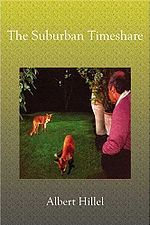 Cover of The Suburban Timeshare

The Suburban Timeshare is a novel by Albert Hillel. It is published and distributed by Booksurge with the ISBN 1591096642.

The Suburban Timeshare is set in England, specifically "in a suburb of South Manchester, [... and] focuses on four neighbouring households, one of which is a family of foxes. The book is episodic in form, [...] with alternating chapters switching between human and fox viewpoint.

Often there is an overlap between the chapters just as people and foxes overlap at dusk and dawn, interacting warily though amicably, each puzzling over the other's nature."[1]