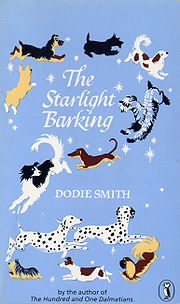 The Starlight Barking is a novel by Dodie Smith. The sequel to The Hundred and One Dalmatians, it takes place more than a year afterwards, and is primarily about Pongo and Missis as well as their now-grown puppies. Particularly prominent is Cadpig, their smallest daughter, who belongs to the Prime Minister and takes on his role on a metaphysical day when all but dogs are mysteriously asleep.

The Starlight Barking was first published in 1967, by William Heinemann Ltd.