The Rush Limbaugh Show and furry[edit]

In January 2005, furries were referenced on a weekend edition of show.

Prior to President Bush's 2005 inauguration, the New York Times and broadcast media repeatedly criticized the Republican party for planning an opulent event to commemorate his win when the U.S. was at war with Iraq. Some also suggested festivities were inappropriate on the heels of the 2004 Indonesian tsunami.

Rush Limbaugh responded by describing a furry convention (Further Confusion 2005, taking place the same weekend as the show) and quoting a talk show host's criticism of the inauguration in this new context. 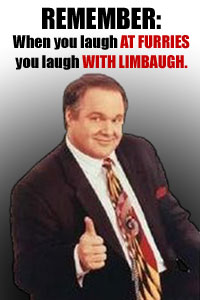 An image macro created after the event

Xydexx, a furry fan, observed that the jibes put some anti-furries opposed to Rush's political views in the position of agreeing with him: