From WikiFur, the furry encyclopedia.
Jump to: navigation, search
Community > Multiplayer worlds > The Realm of Kaerwyn 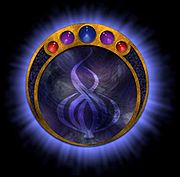 Information about the world setting and mechanics.

The Realm of Kaerwyn is set on a nexus plane, a planet that acts as a hub between an undetermined number of interdimensional planes. As a result, countless races have converged on this planet, and formed a diverse settlement.

The majority of roleplay occurs around an inlet in a lake documented as approximately the size of Earth's Lake Superior. A small town, and a Tavern set a couple of miles outside it are primary play locations, though players are not limited to these locations.

A partial map of the Realm.

Kaerwyn is a planet that much resembles Earth in its climate and vegetation. The area of roleplay is primarily forest, surrounded on three sides by mountains, and the cape of a large lake to the north. With the exception of a few godlike dragons, none of Kaerwyn's inhabitants are native to the area (they "rifted" into the realm.)

Many of the characters who reside in Kaerwyn are anthropomorphic in some fashion, though there is little limit to what species one may choose or create. Humans, Anthropomorphic animals, and werecreatures make up the majority of Kaerwyn's population.