The Penguins of Madagascar

From WikiFur, the furry encyclopedia.
Jump to: navigation, search
Culture > Movies > Madagascar > The Penguins of Madagascar 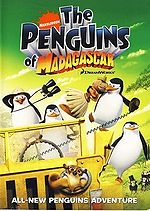 The Penguins of Madagascar poster.

The Penguins of Madagascar (previously entitled Penguins!) is an American television series created by DreamWorks Animation and Nickelodeon Animation Studios and aired regularly on Nicktoons in several countries. It aired from 2008 to 2015 with a total of three seasons and 149 episodes.

The series takes place in and around Central Park Zoo in New York City, and features The Madagascar Penguins as the lead characters, alongside others introduced in the Madagascar film series, such as King Julien. The series also introduces Marlene as a new prominent character in the series, but does not feature series regulars Alex, Marty, Gloria or Melman, though Alex appears in the episode "The Return of the Revenge of Dr. Blowhole".

The majority of episodes in the series focus on the bizarre commando-style operations undertaken by the penguins whilst at the zoo, more often than not undertaken for the benefit of the inhabitants of the zoo. For example, in the pilot episode, Gone in a Flash, they rescue Maurice from a dump in New Jersey, even though King Julien is convinced that Maurice is trapped inside a digital camera and convinces others of this.

The Penguins had previously featured in a Christmas-themed short entitled The Madagascar Penguins in a Christmas Caper, which had been released as a supporting feature to Wallace & Gromit: The Curse of the Were-Rabbit in theatres.

The short focussed on the penguins at Christmastime, undertaking a mission to save Private from a psychotic poodle. Much of the events depicted in the short would prove to be a harbinger for the new series.

Main article: List of The Penguins of Madagascar episodes