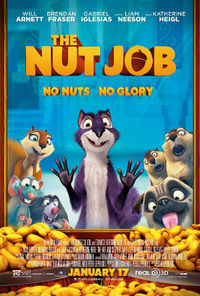 The Nut Job is a 2014 computer-animated feature film produced in by Toonbox Entertainment in Canada and distributed internationally by Open Road Films and The Weinstein Company. The film follows the story of a squirrel named Surly (voiced by Will Arnett), whom after getting thrown out of his home and forced to live in the city, discovers a nut store that could most likely save him and his entire community and plans a big heist to steal all the nuts and candies in the store. The film also features the voices of Liam Neeson, Katherine Heigl, Brendan Fraser, Jeff Dunham, Gabriel Iglesias, Sarah Gadon, Stephan Lang and Maya Rudolph.

The film is based on a 2005 animated short film called "Surly Squirrel" and was released in the USA and Canada on January 17th 2014 and South Korea on January 29th 2014, and would later make various release dates to many other countries, such as August 2014 in the UK and Ireland.

The movie was highly under-appreciated during and even before its release. Many commentators on the official trailer on YouTube and many blogs promoting the trailer used to negatively compare this movie slightly to Over the Hedge, even though coincidentally, Lorne Cameron (who was one of the screenwriters of Over the Hedge) wrote the screenplay to this film as well. They also discarded it as one of those "run-of-the-mill" animated family films that would give feature animation a bad name. When it was released, it was (of course) a major critical failure, with both critics and animation fans alike bashing the script as "disorganized and lazily-written script with a mean-spirited and unfriendly feeling", the characters (mainly the protagonist, Surly) as "unlikeable and obnoxious", the sense of humor as "revolting" and the "unnecessary, out-of-nowhere" cameo of PSY and the song "Gangnam Style" in the end credits. They even debated about the animation, whether it was "decent" or "mediocre and ugly". But even with that, it was however a moderate box-office success, gaining over $64.2 million domestically, earning back its budget of $42 million, and $120 million internationally. A sequel scheduled for August 18, 2017, a television series and a live show have both been announced.[1]

Flayrah has related stories:
Rodent vs. Rodent
Watch Out For The Surly Squirrel
Retrieved from "https://en.wikifur.com/w/index.php?title=The_Nut_Job&oldid=543835"
Categories: