The Night of the Rabbit

From WikiFur, the furry encyclopedia.
Jump to: navigation, search
Culture > Games > Video games > The Night of the Rabbit 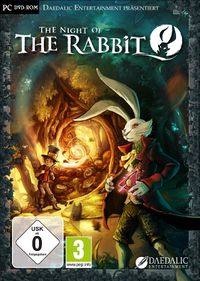 Box art of The Night of the Rabbit. 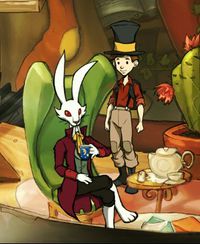 The hares' parties are famous throughout Mousewood.

The Night of the Rabbit is a point-and-click adventure game, developed and released by Daedalic Entertainment in 2013.

In The Night of the Rabbit, the player controls the actions of Jeremiah (Jerry) Hazelnut, a twelve-year-old boy who dreams of becoming a magician. With two days of his summer vacation left, Jerry receives a magical letter containing a poem entitled "How he made a carrot flame". Following the magical ritual described in the letter, Jerry conjures up a trunk containing various magician's props, and from a top hat appears a tall, red-eyed anthropomorphic white rabbit wearing an oxblood coat.

The rabbit introduces himself as the Marquis de Hoto, explains that he is a magician, and offers to make Jerry his apprentice so that he may learn the skills of the Treewalkers - those who use magical portal trees to travel between different worlds. Declaring that "Nothing is impossible", the Marquis promises that, even though Jerry's training may take weeks, he will be back in time for dinner. ("On a day in summer vacation, anything is possible.")

The Marquis opens a portal and takes Jerry to Mousewood, a mouse-scaled town inhabited by an assortment of different anthropomorphic critters, including Anja (a baker mouse and occasional herbalist), the Hedgehog brothers (the local carpenters), Ludwig Burrower (a mole who is the DJ for Mousewood Radio), Spitzweg (an explorer and suslik), and Plato (the mail-frog). Various magical beings also live around Mousewood, including the old (human) Magician of Mousewood, a leprechaun, and a kitsune.

Jerry must solve various puzzles as he begins his magical training, travelling via the portal trees to various locations where he learns magic spells. As the game progresses, Mousewood comes under threat of The Great Zaroff ("the greatest illusionist of our time", whose posters begin turning up everywhere Jerry goes), and a group of masked individuals representing "the Consortium Squamata". Even the Marquis appears to be hiding a dark secret.

The story of The Night of the Rabbit was written by Matthias and Sebastian Kempke.[1] Its working title was The Rabbit's Apprentice.[2]

The game was partly inspired by Alice's Adventures in Wonderland. According to Daedalic co-founder Jan Müller-Michaelis, "Matthias was intrigued by the idea of, ‘What if the rabbit didn’t lure Alice by accident? What if he had a plan, had watched her, and chose her to follow him?’".[3]

The game's graphics are hand-drawn 2D with occasional video cutscenes. The game's backgrounds, by art director Simone Kesterton, are colorized "with subdued shades that call to mind the painted artwork of many classic children’s books", and in places incorporate parallax scrolling to give an illusion of depth.[3]

The Night of the Rabbit was released on May 29, 2013. Available in English and German-language versions, it could be purchased as a boxed game or digital download.

The Night of the Rabbit received generally positive reviews. The game's graphics, soundtrack, and voice-acting were praised,[4][5] whilst criticism was directed towards some of the puzzles with obscure solutions,[4] and the game's less-than-helpful hint system.[5]

Flayrah has a related story:
'The Night of the Rabbit' to be released on May 29