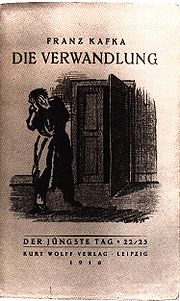 'The Metamorphosis' (German: Die Verwandlung) is a 1915 novella by Franz Kafka, using a transformation theme to symbolize alienation. The story is quintessential in describing literary works by other authors as "Kafkaesque".

The book begins with Gregor Samsa, a traveling salesman, waking one day to find himself transformed into a "monstrous vermin", most typically translated into English as "insect" or "cockroach". However, Kafka insisted that what Gregor transformed into should never be drawn, or even "seen from a distance", leaving the original German "ungeheuer Ungeziefer" intentionally vague.[citation needed]

Instead of focusing on his physical change, he instead complains about the weather. Being a traveling salesman, inclement weather would likely ruin his day. The true reality of his metamorphosis is complete when he sees his many legs waving in the air. However, he continues to resist any conscious recognition regarding his change or the fact that a change indeed happened. He just knows now that he is different from the others now and recognizes the separation from everyone else by his incoherent speech. He is unable to speak in his insect form, and never successfully communicates with his family at all after his physical appearance is revealed to them. He does retain his cognitive faculties, which are unknown to his family. His family, in turn, are unsurprised by this turn of events and view it as just another burden on them and so despise him. Horrified by his appearance, they shut Gregor into his room, with his sister feeding him rotten table scraps as he lost his taste for fresher food.

Time passes and Gregor changes further into an actual insect, his family distancing himself further and further as his condition worsens, and because they resent the loss of income caused by his transformation.

To make up for the lost income, the family takes three boarders into their home. Gregor's sister offers to play the violin for the boarders, and Gregor sneaks out of his room to listen. When the boarders lose interest in the violin, one notices Gregor and begins to panic. Gregor's father tries to chase the boarders back into their rooms, but they tell him they will be leaving immediately without paying rent due to the condition of the home.

This increases the family's resentment of Gregor, even swaying his sister against him. Her rejection of him is total when she says to the family:

The sister then determines with finality that the insect is no longer Gregor, since Gregor would have left them out of love and taken their burden away. Gregor returns to his room, lies down, and dies.

After discovering his body, the family is relieved. They take new stock of their finances and resolve to move into a smaller apartment to save money, which they were unable to do if Gregor was with them.