The Madagascar Penguins in a Christmas Caper

From WikiFur, the furry encyclopedia.
Jump to: navigation, search
Culture > Movies > The Madagascar Penguins in a Christmas Caper 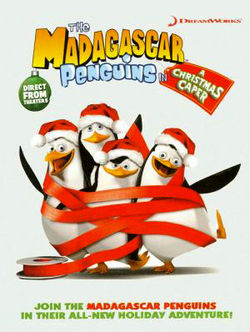 The Madagascar Penguins in a Christmas Caper is a 2005 short film by Dreamworks, created as a spin-off from their successful animation comedy Madagascar, which had been released earlier in the year.

The short takes place prior to the events of Madagascar, when the characters are still residents of Central Park Zoo in New York City.

It is Christmas Eve, and Private - the youngest of the four penguins - feels upset at the fact that their neighbour, Ted the Polar Bear, is alone on Christmas. He suggests to his penmates that they buy Ted a present, but Skipper and Kowalski reject the proposal.

Undeterred, Private sneaks out to buy Ted a Christmas present, but is accidentally mistaken for a chew toy by Nana (a vicious elderly human first seen in Madagascar), who takes Private home, where he becomes the target of her psychopathic pet poodle, Mr. Chew.

Meanwhile, the other penguins notice that Private is missing, and set out on the streets of Manhattan to locate him. They trace him to Nana's apartment - deterring Rico from blowing things up along the way - and defeat Mr. Chew through a comical action sequence that ends with Mr. Chew hanging from the Christmas tree by a candy cane stuck to his fur.

The penguins return to the zoo, and Private finally convinces Skipper to let Ted celebrate Christmas with them, only to find that Ted has invited the entire zoo to the penguin habitat - who all sing a modified version of Jingle Bells to finish the film.

The short was the first attempt to give The Madagascar Penguins a prominent role in the Madagascar franchise, but also completely redesigned the character of Rico, who was altered from a sharp-minded mute into a Bobcat Goldthwait-style eccentric, most likely to give more appeal to the character. However, the other characters remained the same for their appearance in the short.

The short also acted as a prototype for the television series The Penguins of Madagascar, which would return the penguins to the spotlight following their appearance in Madagascar: Escape 2 Africa, although the series did not follow the short entirely, particularly as the penguins are the only characters to appear in both.

A Christmas Caper first appeared in theatres on October 7, 2005 as a supporting feature to the British claymation film Wallace & Gromit: The Curse of the Were-Rabbit. It was later re-released on November 15, 2005 as a special feature on the DVD releases of Madagascar and Shrek.