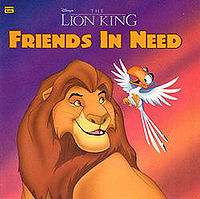 The Lion King: Six New Adventures (usually shortened to TLK6NA) is a set of six children's books that were published soon after The Lion King was released. Some of them included new characters that weren't in the movie, and some of the stories are about characters when they were younger. The books are out of print and may be hard to find. They are well liked among some Lion King fans who like the extra plot they contain.

Whether the books are canon or not is arguable, since some of the content was apparently retconned in The Lion King II: Simba's Pride. Most notably, Simba and Nala's cub appears in a couple of the books and is a male named Kopa, unlike Simba's Pride where their only cub is Kiara, a female.