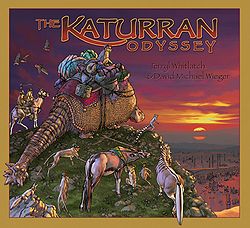 Cover of The Katurran Odyssey.

The Katurran Odyssey is a fantasy book written by screenwriter David Michael Wieger, created and drawn by Star Wars creature designer Terryl Whitlatch, and digitally colored by Stephanie Lostimolo. It takes place in the fictional world of Katurrah, which is inhabited by sapient versions of Earth animals. The first book of the The Katurran Odyssey was published in 2004 by Simon & Schuster through the transmedia company Imaginosis.

The book opens with a prologue of a Bo-hibban storyteller opening the tale of Katook. Katook is the book's main character and hero, a small adolescent male Ring-tailed Lemur. At the time of the storyteller's tale, his home village of Kattakuk was suffering under an extremely severe and lengthy winter. It hasn't rained in months, the baobab trees they live in are bare of leaves and figs, and most lemurs are starving. The High Priest who rules Bo-hibba, an Aye-Aye named Gamic, holds a ceremony and collects offerings of figs to try and appease their god, The Fossah. However, Katook and his best friend find the priests and their guards eating the offerings. They are discovered and are nearly caught, but not before Katook is saved by a mysterious appearance of The Fossah. Katook is caught, and to keep him quiet about what he saw, his now-blue eyes are used as an excuse to exile from his village to a beach on the edge of Bo-hibba.

There on the beach, he encounters hatching baby turtles, and defends them from being eaten by birds. In return for this, he is taken by the baby turtles' mother on her back across the sea to the port city of Acco, intending to search for others of his own kind. After an altercation with thieves in the city, he meets up with Quigga, a vain and proud Quagga who has lost his herd.

Quigga joins Katook and they run into the Kolloboo. However, Katook is homesick and still longs for his own kind. The Kolloboo tell Katook to search for the scientist Nadab, who is staying with the Golden Monkeys, and who may be able to find creatures similar to him. They give him a map, a compass, and a message to give to Nadab. From there, Quigga and Katook venture out snd become lost in a barren desert. As it turns to night time, they hide in some ruins to escape creatures called Bone Crushers until the Patah come to save them.

The Patah bring them to their tent guarded by Glyptodonts. They present an elaborate demonstration. As Katook stays with the Patah, he learns of illusions and realizes that Gamic has been fooling the lemurs through trickery. After the demonstration, the Chief of the Patah requests Katook's presence. The Chief's son wishes to have Katook's map and compass but Katook defuses, saying that it his only way home. The Chief questions why he feels so alone and what he means when he seeks home, and shows him that he may not be as alone as he thinks.

They continue on their journey with the Patah, but are attacked by giant Dodo Birds. In the battle, many Patah are killed. Quigga and Katook escape into a river, where they are saved and healed by the Boskii. They are welcomed into their rainforest and comforted during their stay. Soon Katook must confront Dikemba and the rest of the Boskii who explain that his blue eyes may not be a curse after all, that they may even be a blessing. The Boskii point him in the right direction and tell him to follow the Butterflies, which lead them to the city of the Golden Monkeys.

In the city of the Golden Monkeys, Katook finds Nadab. However, Nadab is not of much help and does not show him to other creatures like him. Instead, Quigga is enslaved and imprisoned and Katook becomes the Golden Princess's pet. Katook, though, explains his mission to the Princess and the Princess helps him and Quigga escape. However, they are found out at the last minute and in the commotion to catch the escapees, much of the city falls down in ruins and they escape only narrowly.

Afterwards, Quigga reveals to Katook that he does not have the instinctive direction as he claims to have and asks Katook to show him how to navigate by the stars. Katook shows him how to read the skies, as the Patah showed him. The next morning, Quigga sees his own herd in the distance and tells Katook that he must leave and rejoin his herd. Katook is sad to see him go and feels more alone than ever, but then he sees a strange shifting shape in the distance. This becomes the The Fossah, who tells him that he has been beside him all the time throughout his adventures. The Fossah shows him True Home - a paradise with those who are not yet born and those who already lived. Katook does not want to leave, but knows that he must if he is to save his village from the long winter. The Fossah gives him a seed which he must plant in the ground.

Katook is transported back to his own village where he sees the starving lemurs digging for food. Katook is brought to Gamic and his Indrii guards, but uses the trickery the Patah had taught him - the same which Gamic used to fool the lemurs that he was showing signs from the The Fossah. Katook persuades the Indriis to let him go. They do, and Katook finds shelter among a rock, feeling that all hope is lost. As he sleeps, the seed which the Fossah gave him falls from his hands and into the soil. When he awakes, the sun is shining and the baobob trees are once more growing plentiful with figs.

And that is how Katook ended the Long Winter, the Bo-hibban Storyteller finishes. The audience of young lemurs insist on another story and ask whether Quigga and Katook ever meet again, but the Storyteller says that that is a story for another day.

One of the hooks of The Katurran Odyssey is that all of the animals (except one) featured in the book are all animals that can or could be found on Earth[1]. Many of the still living animals shown are endangered. Some of the more prominent animal species featured in the story are listed here. Many Katurran species names in the story seem to be derived from the animal's English or scientific names.