The House of Lazarus 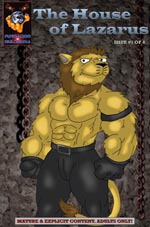 The cover of The House of Lazarus #1.

The comic follows the story of otter and private investigator Connor Odell, who finds himself captive, imprisoned within the mansion household of dominant lion Master Lazarus Kole.