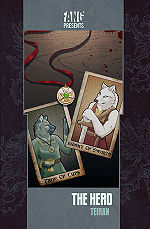 The Hero is the first novel by Teiran. It is published by Bad Dog Books as part of their Fang Presents line of novels. The book contains illustrations by Ayame Emaya, Satinka and Kamui.

The Hero debuted at Anthrocon 2007. It was sold in the dealer's room at the FurNation tables and Teiran was present to sign copies for fans.

The Hero is a gay fantasy novella which follows Flint, a young hyena and lowly innkeeper's servant, who follows his heart and his hopes to find betrayal, heartbreak, companionship, danger and conspiracy as he quests for that finest prize of all: the heart of the one he loves.

Flint rises above himself, with the aid of some unexpected friends, as he faces off against an insidious order of religious zealots and the prejudices of an entire nation in his simple, honest and pure desire for the love of his knight in shining armor, the wolf Aldain, Knight of the Cross.

Despite its modern alternative romance and the bouts of eroticism, this book is at its heart conventional fantasy.