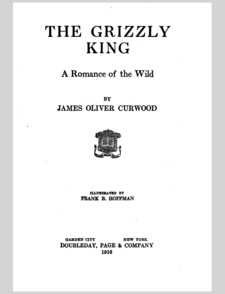 The Grizzly King is a novel by James Oliver Curwood. It is the second book of his series of nature books, between Kazan and Baree, Son of Kazan. The Grizzly King of the title is a bear, Thor. Thor, a mighty adult grizzly, and Muskwa, a motherless bear cub, become companions in the Canadian wilderness.