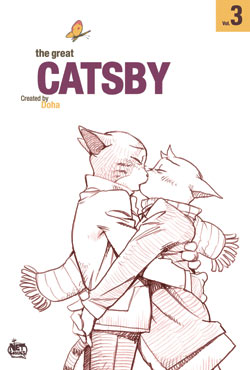 The Great Catsby (Korean: 위대한 캣츠비) is a Korean webcomic written by Doha Kang. Daum published the comic in its original language on the internet. Netcomics, which holds the translation publication rights, published the comic in six volumes and on the internet in English. The title is a play on the classic novel The Great Gatsby by F. Scott Fitzgerald. The story is also loosely based on The Great Gatsby, except the characters are anthropomorphic cats.

Catsby (캣츠비): The main character of the series. He is usually carefree, but is often depressed, and sometimes prone to panicking.

Persu (페르수): Catsby's long-running girlfriend who leaves him to marry another man. After becoming disappointed with her marriage, she begins stalking Catsby after he starts dating Sun, even going so far as to confront him and demand that he come back to her.

Sun (선): After being rated a "C" by a dating organizer, Catsby is paired with Sun, who also was rated a C. Both she and Catbsy begin to become extremely attached as the series progresses. Almost constantly shows extreme optimism, even to the most simple things, and playful to an almost child-like extent.

Persu's Husband: Nameless character who makes an appearance in the first volume as Persu's husband. His demeanor is extremely stoic, almost to the point of hostility, but as the story progresses, he is revealed to be a much more gentle, though emotionally plagued, individual.