The inspiration for the story for "The Furry, Furry West" was developed as an amalgamation of various western films, characters, and concepts, and a need to create a narrative to drive the 2017 convention year for ACFI. Titled after ACFI's theme in 2017, "The Furry, Furry West", the story was developed alongside the grand scheme to build a fictional universe around the convention and establish an ongoing narrative;[citation needed] this first installment in the series introduces the various characters and creates a starting point from the plot to evolve from.[1] 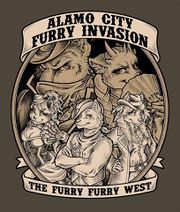 Cover illustration for the story "The Furry, Furry West", which doubled as the T-shirt art for the 2017 convention year.

The story opens with the series' lead character, Sheriff "Dusty" Don Holliday relaxing on the porch of the sheriff's office, when his top deputy, Red Feather, approaches with a letter from the town mayor. Inside the letter is a notice about potential crime activity at the annual Fur Antonio Trail Rodeo & Festival, given by an anonymous tipper who identified the notorious Red Mask Gang as the perpetrators. When the Sheriff goes inside to begin detailing his modifications to the security arrangements for the year, he notices that the local jail cell is empty, and admonishes the jailer for letting the local nuisance, June Raccoon, escape.

Across town, a scout—presumably for the gang—meets with a shadowy figure by the local watering hole, and is told to get the preparations in line. Sheriff Holliday meets later with the mayor, assuring her that the security arrangements will be satisfactory, when a fleeing June Raccoon is knocked down quite by accident by the Sheriff, who praises Deputy Red Feather for a job well done (even though Red Feather was at his side the entire time and did nothing to capture June). As the Sheriff begins to chastise June, Red Feather's mother—Chief Thunderstick—appears, startling the sheriff. After the chief gives Holliday an earful, he excuses himself for a rendezvous with Miss Tabby Sweet at the local saloon, and the chief prods June and the deputy who was chasing him to the sheriff's office, poking them with her staff.

Mei Long arrives from a sojourn to speak with her old performing partner at the local theater, and arranges to make an entrance into opening ceremonies at the festival. At the Dusty Paw Saloon, Holliday and Judge "Sandy" Dunes share drinks, and the sheriff annoys Tabby with his banter until she stomps off, and Red Feather arrives to summon Holliday away to a meeting with the local business owners. After they leave, Tabby and Dunes trade barbs as she pines about finding a way to get Holliday's attention. At the meeting, Holliday and Red Feather listen to and assuage the concerns of the local businessmen that security will be tight enough to prevent the Red Mask Gang from disrupting the activities or stealing anything of value.

Back at the fairgrounds, the scout surveys the scene and picks out ideal places to enter, exit, and hide, and upon leaving passes a cart behind which the shadow of a man hides; a man in a red hat.

The story formed the narrative basis from which the live plays performed during Alamo City Furry Invasion 2017 were derived.[citation needed]