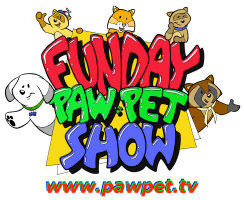 The Funday PawPet Show is an Internet broadcast featuring the puppetry talents of several Florida Furs, including show founder Randy "Yappy" Fox. While various changes have come and gone in terms of equipment, location, and performers alike since the show began in 1999, it continues to this day with only an occasional week off due to convention activity or circumstances beyond their control, such as illness. The show encompasses Puppets, Fursuits, Interacting with Twitch audience and interacting visually with VRChat users in a world nicknamed "The Chaos Lounge" where interactive games are played, as well as interviews. With the outbreak of Covid, Zoom calls became integrated into the show, which allowed social distancing during the pandemic, but also now allows for international cast members as well as guests unable to travel to the live studio.

On November 10, 2019 the show moved to Twitch after many difficulties involving YouTube.[8] On November 22, 2019 it was announced all future episodes would be streamed live on Twitch instead of YouTube.[9] The YouTube Channel which hosted the livestreams and archives of those episodes has since been deleted but all archives of the show can still be found on the Funday PawPet Show website. The Funday PawPet Show held it's 20-year anniversary on November 24, 2019.

The show is hosted by a cast of animal puppets, all mostly made by Folkmanis. The primary roles are played by the main Master of ceremonies sheepdog, Mutt, along with his sheepdog stand-in, Ezra. There are supporting cast members that assist with world building, maintaining wikis, and chat moderations: Campion_Lapine Chat moderations, FurYetUnNamed Episode wiki editing, Fooma VrChat world builder.

Guests who visit the show often participate by being interviewed by the PawPets and the viewing audience.

A segment entitled Subservient Fursuit is broadcast on an infrequent basis. It is based on the Subservient Chicken viral marketing campaign by Burger King and featured a fursuiter having their actions directed by the viewing audience. The word "Fursuit" in the title was replaced by the fursuit's name at the time of the broadcast. While the show was not intended to be rebroadcast or redistributed at any point, many of the Subservient Fursuit segments wound up on YouTube.

On the night of September 11, 2001 the cast quickly assembled for an impromptu show to help calm people and find out who in the community was directly affected by the 9/11 attacks. This is the only show that was intentionally never made available for the weekly download. As such, it has not yet resurfaced online.[10] Viewers sent the cast thank-you letters and awards for their efforts.

The Arthur Awards are the Funday Pawpet Show's version of the Oscars which was named after Arthur Braunschweiger, one of the characters in the show. Votes are cast for various categories such as “BEST ART JAM”, “PAWPET OF THE YEAR”, and “WORST POOT EVER”.[11]

These are no longer done.