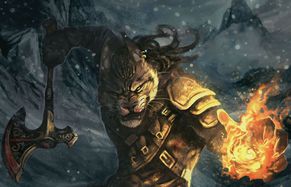 The Elder Scrolls (abbreviated as TES) is a role-playing game series developed by Bethesda Softworks. Almost all of The Elder Scrolls games take place on the continent of Tamriel, a large landmass divided into nine provinces. An exception is The Elder Scrolls Legends: Battlespire, which takes place between a realm of Oblivion, one of several alternate dimensions ruled by immortal Daedra, and the mortal realm of Mundus. The games are of interest to furries due to the availability of anthropomorphic species as a player character.

The Elder Scrolls and furry[edit]

There are two anthropomorphic races available for player characters.

Argonians are a highly evolved race of reptilians. They are known for their intelligence, agility, and speed. Because of their reptilian nature, argonians possess an inherent water breathing ability. They can also swim faster than any other race.

They are adept at any art involving the arcane, or involving thievery or sleight of hand. Argonians were once popular slaves due to their abilities which made them hardier than other races.

However slavery was abolished in most of Tamriel and since then argonians have become integrated into mainstream society. [1]

Khajiit are feline humanoids who are extremely hardy, intelligent, and agile. Many khajiit have taken to painting their faces to more resemble their distant cousins, the predatory cats that hunt the great desert. Khajiit are expert climbers, able to scale chasm wall sides with speed unmatched by any other race.

They are adept at all arts involving thieving and sleight of hand. Khajiit have a weakness for sweets, especially the drug known as skooma. Many khajiit disdain weapons in favor of their natural claws.

They make excellent thieves due to their natural agility and unmatched acrobatics ability. [2]

The Elder Scrolls Online is an MMO game that has all of the anthropomorphic elements of previous games, but adds a social aspect. It was released 2014/4/4.