The Dirtbombs are a rock n' roll band based in Metro Detroit, Michigan, notable for blending diverse influences such as garage rock, punk rock and soul while featuring a dual bass guitar, dual drum and guitar lineup. The Dirtbombs were formed by Mick Collins (of the influential garage punk band The Gories) as a side project and started recording songs by 1995. They are currently well known for the song "I Can't Stop Thinking About It" from their 1998 release Horndog Fest which has been featured in GM radio commericals. 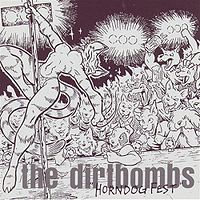 The 1998 album Horndog Fest featured the tracks "Vixens In Space" and "Fox Box" as well as artwork by Joe Rosales on the cover. It also features a shout out to the furry fandom in the liner notes. Their later albums also feature some notable furry related songs: "21st Century Fox" and "F.I.D.O" from Dangerous Magical Noise, and "Leopardman at C&A" from We Have You Surrounded.

While it is known that writer and front man Mick Collins is a furry, it is unknown whether other members of the band are.