The Depths is a furry-based web comic illustrated by A Blue Deer, and written by Leilani Perriere.

The concept began in 2009, when Leilani began writing erotic stories for her sea otter character. With the help of artist A Blue Deer, whom she had been a fan of for many years, they decided to work together to create a web comic based on these stories. In the spring of 2017, The Depths was launched, and the two worked together via their Patreon, under the name of Dark Blue Comics - not just with The Depths, but also A Blue Deer's other comics, Moonlace and Bethellium. At the end of 2017, a second artist, Kino Jaggernov, was added to the team to assist with coloring, inking, and special effects.

In April of 2018, The Depths pulled away from the Dark Blue Comics' Patreon, and a new Patreon was launched exclusively for The Depths web comic, in order to enable multiple rewards for supporters, and to bring more exposure and readership. Since then, The Depths has enjoyed successful readership, and has consistently ranked near the Top 100 most read web comics on the Belfry WebComics List. It has received rave reviews for its writing and illustrations, and recently earned further distinction from Top WebComics, ranking among the Top 300 web comics in the world.

Based in the 1920s through the 1940s of an alternate Earth, the web comic follows a sea otter named Leilani Perriere, and her adventures above and below the South Pacific as she courts romance, danger, and epic adventure.

Leilani Perierre, a 30-something native South Pacific sea otter, enjoys an intimate encounter with her lover Thierry Savage, a black panther and a French detective with the Suerte, in the beautiful island of Tahiti. The year is 1938, and the world is at the brink of war. After making love and expressing their feelings for one another, Leilani recalls her first lover, David Perierre.

Back in 1922, Leilani was the daughter of Chieftain Sachem Ahomana in Bora Bora. She shows her collection of black oysters to her friends.

The chieftain always had her by her side during important meetings with foreigners. During one of these meetings, she snuck away to go swimming with her friends and explore a ship. David, a ship hand, let go of one of the nets, inadvertently dragging him down into the water. Leilani managed to save him with her dagger and providing air. After a brief meet and greet on the ship, Leilani invites David and the others to the island.

A few days later, David tells Leilani that he must return back to New York to report on his story. Before he leaves, she shows him a secret under the sea, an undersea cavern her mother, now dead, used to take her to when she was younger - and the location of numerous black oysters. After showing David her discovery, the two make love heavily in the undersea cavern and then frolic for more fun in the depths. David professes her love for Leilani and asks her to come away with him back to New York City, to become his bride. But Leilani, struggling with her emotions and her ties to her father and tribe, refuses.

Back on shore, David tries to stop Leilani as she runs crying from the water, only to be stopped by Jamie. He tells David that after talking to Malana, knows about the black pearls Leilani is able to find, and wants her to find them for him and the operation he works for stateside. After a heated discussion, David relents, on the promise that the Night Wind, their vessel, leaves immediately and never returns.

The next morning Leilani, her best friend Kalea, and Malana set off with Jamie, David, and a small crew to search for black pearls. David and the girls literally find themselves over their heads when Jamie changes plans, and nearly kills all of them before succumbing to the ocean's depths himself. David managed to save a nearly-drowned Leilani and Malana confesses everything to Leilani, who turns out to be her older sister. The girls manage to explain themselves at a tribunal and blame Jamie's "death" as a misadventure, and David and Leilani are reunited in love. Meanwhile, Malana speaks to her father and realizes Leilani will likely leave with David. Her father orders Malana to go with them, to keep the princess away from any harm.

The story shifts back to the present-day 1938 again, after Leilani finishes her tale in flashback. Thierry, completely overwhelmed with love for her, begs Leilani to marry him and leave with him when he heads back to France. But before the adult sea otter can make a decision, they receive a visit from Kalea and Malana, who inform her she must return to Bora Bora immediately. A lot of things have happened as well, as Kalea now appears to have gained telepathic powers, and Malana is now a hard-fought warrior who loves Kalea with all her heart.

When they arrive in Bora Bora, thanks to Thierry's vessel, Leilani is stunned to see her ex-husband, David, waiting for her. He tells her that he is on a special mission to her island to investigate a few mysterious sinkings around the South Pacific ocean, and informs her and the other girls where a specific vessel, The Blue Raider, may have sunk, some 500 to 600 feet below the sea. Leilani is skeptical but agrees to help, as do Malana and Kalea.

But when David's story starts to change, and he asks the girls to find a specific artifact on board the sunken vessel, Leilani's skepticism returns. The girls make the treacherous dive to the wreck and uncover a mysterious amulet tucked away inside a protected box. With her breath nearly gone, Kalea swims away in terror, unable to take the constant pounding inside her head that this amulet is dangerous. Before she can swim back to the surface, she's grabbed by an unknown creature and pulled down into the depths, unconscious.

Malana and Leilani meanwhile take the amulet they found with them and hurry out of the wreck, fighting to hold their breaths as well - only to be surrounded by a group of menacing manta-girls. Malana spots a drowned Kalea being held in one of the manta's arms and furiously charges at them. But Leilani stops her, realizing they would both die. The lead manta-girl uses telepathy to order the otters to follow them and they are surrounded.

Kalea awakens inside an undersea cavern, in the arms of the lead manta-girl, Tahnee, and we soon realize the two have a history together from the time Kalea was in her teens. She is made aware her friends are safe and she offers to take Kalea to them. Once inside, we learn several males from The Blue Raider were taken prisoner. 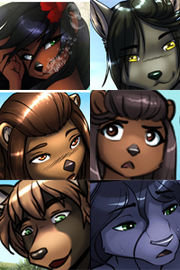 Leilani, daughter of a tribal chieftain in the South Pacific, is the main character of The Depths, and acts as (unreliable) narrator for flashbacks to her numerous adventures of romance and danger.

David, Leilani's main love interest in her retrospects, is a journalist from New York City. He falls for Leilani at first sight and wants nothing more than to be with her forever.

Malana, beautiful but brash, is Leilani's foil. While she strives to maintain a shaky friendship with the other otter, her jealousy and envy get in the way.

Kalea, Leilani's BFF. She sees her friendship with Leilani as a pleasure and a privilege. She is sweet and kind, and the peacemaker when Malana and Leilani are at odds.

Jamie, the callous, manipulative antagonist and foil to David. His lust for the beautiful otters in this strange new world is only equaled by his lust for power and wealth.

Thierry, a French detective of the Suerte in Marseilles. While his story is mostly unknown and he does not appear often, he is undoubtedly Leilani's new love, and hopes to make her life happy somehow.