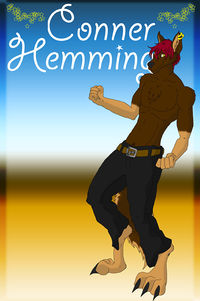 Dracofoxy's fursona is a brown and tan folf (fox/wolf hybrid) with red hair, golden eyes and two gold earrings. He also writes short stores about himself as a "hemming", his self-created species. [3] [4] [5]

On September 7 Dracofoxy was interviewed on Furry News Network [6] showing his opinion on the furry fandom which eventually lead to a comment made by Fayroe. this news interview eventually led to a discussion on FurCast. [7] [8]

He claims he was banned by Dragoneer for adding art to his favorites' page.[11] However, many of his bans were for harassment, stalking and threats to other users on the site. [12] [13] [14] It has also been known[citation needed] that he antagonizes artists such as PawstheFox.[15]

Recently[when?] he was suspended again for evasion on two accounts; one of those said accounts was Eamane the new mate of Dracofoxy [16] Which led to this reply on Dragoneer's deviantART page.Conner Remark On May 12 he created the "Eamane" account on the Fur Affinity Forums to post a thread about the Innuendo Region Minecraft Server. [17] It did not take long for someone on the forums[who?] to discover they were the same person, prompting a swift ban from the Fur Affinity Forums.[18]

Dracofoxy also uses The Deadly Wolves, previously known as Deadly Wolves Pack[19][20]. The band members, which were made up by Zach, were Dracofoxy himself, Fera Hemming, Waya Hemming, Kane Smith, and Ayame Hemming. However, this has been known to be false, considering many claims that he represents others' work as his own without giving credit.[citation needed] A few incidents of this included taking other artists artwork to using as covers or promotional material to promote his band.[21][22] The actual artwork of the cover is Rough Beauty by Fluke. As well as ripping off songs from other music artists.[citation needed] An incident of this ended up having said songs being taken down as said on The Deadly Wolves band Fur Affinity page.[23] Another relation to this would be TheHemmings an account which was created to be a similar band to The Deadly Wolves.[24]

On April 2011, two Second Life videos that were posted on YouTube called “Sit Close”[25], and “Whatever works for you”.[26] from his band The Deadly Wolves on his main YouTube account Conner Hemming. Eventually it was discovered quickly from several YouTube users that the lyrics were actually two stolen tracks called “Consider This”, and “Sounds of a crowded room from the album Say Hello by the band Born without Bones.[27] This led to his main YouTube account, as well as one of his alt account, Macrofurry being terminated from multiple third-party notifications including one from GiantessKatelyn.com. On April 4, 2011, a DA journal was posted by Dracofoxy himself, explaining it as a YouTube glitch.[28] On April 5, he posted another journal claiming his YouTube page was locked for 24 hours. [29] On April 25 he posted a journal entitled Macrofurry Returns [30] showing that his Macrofurry account may be restored but so far the account name is still terminated.

Also factual is many accounts mentioning, or associating The Deadly Wolves which would include ConnerFirehawk, and Shadowconner. But sockpuppets he made of his band members. FeraHemming,WayaHemming, and KaneSmith which were also banned. Other accounts that supported the band would be Jeboaman [31]