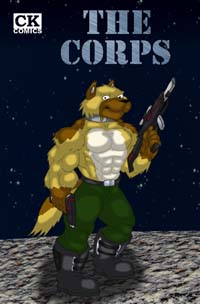 The Corps is an irregularly updated webcomic series created by Cyberklaw. It is a gay adult military sci-fi story.

The Corps was created by Cyberklaw in June 2007. It was originally his intention to update it regularly, producing a couple of new pages every week. Although he did manage this for a number of weeks, it ultimately proved too difficult a pace to maintain with his busy life and other comics projects, so the comic stalled.

In October 2007, Cyberklaw returned to the comic with new pages, intending to continue the series, but on a more irregular basis, producing further pages whenever he is able to.

The Corps is set in a futuristic universe of spaceships and sci-fi technology. The story ia about German Shepherd Dog Lieutenant Harker, a soldier in the Interstellar Anthro Military Corps, a powerful intergalactic military organisation who do their best to try and keep the peace in a galaxy full of dangers and threats.

Like all the troops in the Corps, Harker has no idea who he was prior to his military life, as all Corps recruits have the memories of their previous lives erased and undergo mental reprogramming. Additionally, within the all-male Corps, sex between troops is actively encouraged, in order to relieve stress and forge strong bonds.