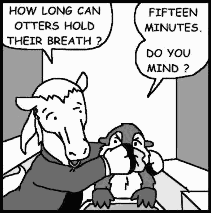 The Changing Workplace is a webcomic created by Oren Otter. It is distributed by and was the former flagship comic of Pandora Comics. It is owned by Intense Comics, and is penciled by Ann Vole and posted and maintained Caliroo Brownlee. Among those who have contributed in the past are inker Eala Dubh and colorist Kyle Roocoon.

Oren Otter was one of the most prolific writers of the Transformation Story Archive. "I often saw the TSA as where I worked." says Oren. "I'd go in each morning and write a story, just as faithfully as if I were getting paid." This gave Oren the idea for his very first webcomic- one which would indeed portray the TSA as an office.

In the comic, Oren is looking for an exciting new job. He is intrigued by an office building where a taco runs out in the street shouting that the local genie was responsible for his current condition (A common occurrence in the TSA chat channels). In his interview with CEO Thomas Hassan, Oren is asked if he has any experience in transformation. Oren coincidentally undergoes a spontaneous transformation into a river otter and is hired immediately.

In his job, Oren is to fill out paperwork for other individuals and groups involved in transformation in order to simplify their lives. (Thus the name of the company, the "Transformation Simplification Agency") Among his clients are Circe, Sirius Black, the Animorphs, the Human Extinction Agency and many others. Other writers from the TSA are repesented as co-workers, including Aatheus Centauri, Light Otter, Sandfur and Eala Dubh.

In The Changing Workplace and other comics, Oren is a human who has been turned into an otter and despite finding the change an improvement, finds adapting to life as an otter challenging.

Oren's relatives include his daughter Amanda, a plush toy who walks and talks and has her own series; his sister Felice who draws the comic Knight Shift; Nephew Xan the Armadillo; his furry godchildren Frost, Martin, CJ and Kyle; and Lee Vary, author of Orwell's Gas Station about life in a truck stop.

Art mirrors life. When Oren the writer left the TSA over a matter involving some particularly nasty unsolicited critiques endorsed by Hassan himself, so Oren the character was dismissed from his TSA as well. Both real-life and character Oren found themselves becoming heavily involved in the furry community. Then, as real-life Oren discovered other webcomics and became actively involved in promoting them, so character Oren found himself sitting at a roadside stand selling said comics to passersby.

Eventually, a rival organization to the TSA formed. Three characters from transformation stories; Duster the Skunk from "The Square Pegs", Mi the Sprite from "Fuzzy Doom" and Dumb Blonde 6 from "Literalness" asked Oren to join them and lend his expertise to their organization.

The Changing Workplace has inspired a number of spinoffs. The first of these was Knight Shift, in which oren's sister, Felice, works in the nursing home where Oren once held a temp job as a cook. The twist is that she is always surrounded by the characters from her fantasy stories.

A Roo'd Awakening by Wallaroo Black begins when the TCW character Deranged Kitsune accidentally transforms a large chunk of the world's population into anthropomorphic animals while trying to upgrade his satelite dish.

Amanda is hosted by Oren's daughter, a plush toy otter who sprang to life in the manner of Pinnochio. The cast also includes PJ from Tommy and PJ, Oren's nephew Xan the Armadillo and an assortment of Xan's plush toys.

Oren also appears in Transformation U. by Fiona Ferret, a comic in which a human girl named Fiona trains for a career as a ferret.

In 2004, Oren made a bit of a career change and left The Changing Workplace. He left the comic to his daughter, nephew and numerous furry godchildren (by this time, three young men had made him their Furry Godparent) and made his way to St. Fred's Cathedral and Monastery to star in the webcomic Oren's Monastery.

Oren's Monastery was perhaps the first webcomic to take an established comic star and icon of the furry community and place him in an overtly Christian setting. The response to this was tremendous. As Christian Furries wrote to show their support, a community began to form, which soon gave rise to the Christian Furry Fellowship, an online "church" of sorts of which Oren is the former pastor.

Despite this career change, Oren continues to appear in the newest season of The Changing Workplace as a freelance transformation expert.