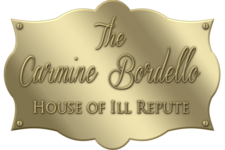 The Carmine Bordello is an adult dream within the game of Furcadia, owned by Contingencyiam and Lobsel Vith. It has a world package, and it has its own group tag, which show sup in a user's Furcadia description when he/she/they register with the group. The name was suggested by Siena, the owner of The Golden Tether

The Carmine Bordello is located in the Palace Courtyard in the new version of FurN, near the Club Nimbus and The Golden Tether dreams. The bordello is nestled midway up a mountainside, overlooking a Floret lake, the surroundings being mainly pine trees, mountains, the strip of land with the port town of Northcrest, and then the sea (description only, non-accesible). It has a typically rainy climate in the summer and spring months, and chilly winters with heavy snowfall.

Set in a luxurious manor, lavishly furnished, it is the perfect setting for [[[character]]s seeking a fine establishment to blow off some steam, or board in.

It is also a good place for characters who are down on their luck and seeking employment. They offer such jobs as maids, butlers, lounge attendants, etc, and hosts and hostesses (for those seeking sexual roles).

The dream has it's own economy and monetary system (TCB coins), that works in tandem with Furcadia's existing Cookie Economy.

One "Cookie" can be traded for 500 TCB coins. The currency is similar to a dollar amount (1 TCB coin=$1), and items are priced accordingly within the dream. TCB funds can also be used to pay for the companionship of a host or hostess, to rent a room from the front desk, to buy various foods and drinks, to tip other staff, or just to hoard to yourself in your coinpurse, or lockbox.

Money can be transferred to other players also. Members get 100 TCB coins every day the first time they visit as a loyalty perk.