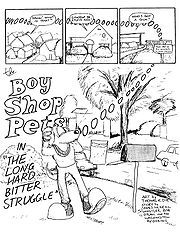 The front cover of the first issue of The Boy Shop Pets.

The Boy Shop Pets was a short-lived comic book, created by Thomas K. Dye, the creator of Newshounds. It was written between November 16, 1991 and January 1, 1992. The book invented some of his Newshounds chracters, including Kevin J. Dog, Alistair Katt, Renata Fayre and Ferris the Rat. The name comes from the British pop band Pet Shop Boys.

The comic centred itself around Kevin's attempts to write a film script for Hollywood. Alistair often comments that he will never make it, due to the multi-million dollar operation that Hollywood is. Alistair tries to take his mind off things by finding her a girlfriend, Renata, with the help of Ferris and his friend Kerouac. Renata however, starts to help Kevin with his scripts.

The style of the characters differed in many ways. Renata for example does not wear any clothes, and Ferris is more working class in his speech and manner.