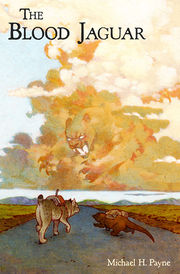 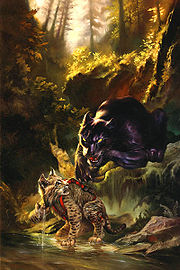 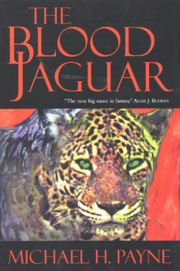 The Blood Jaguar is a furry novel written by Michael H. Payne that appeared in serialized form on the (now defunct) TomorrowSF website and was published by Tor Fantasy in 1998 (and in paperback in 1999). It was reprinted with a new cover and illustrations by Sofawolf Press in June 2012.[1]

It's a change time for Bobcat the catnip junkie when he meets the Blood Jaguar who brands him with her clawmarks -- and that, when combined with the fact that his friend Skink has lost his luck, means only one thing, as the local shaman, Fisher, explains: the deadly plague will sweep over the world, and the three of them must embark on a long and dangerous quest in an effort to prevent it.

The author has written at least seven short stories set in the same story universe. One of them, "Three Ladies", available online from Claw & Quill, gives some background on the title character and the other curials who appear in The Blood Jaguar. "Law and Justice", which appeared in issue #5 of Black Gate magazine in 2003, and "Lady Raven and the Falcon Prince", which appeared in the New Fables story collection from Sofawolf Press, give additional background on the curials. A fourth story is planned to complete this sub-series. Other related stories are "Rat's Reputation", which appeared in Best in Show and features appearances by Bobcat and Fisher. The others are "Rat's Reckoning", "Kily's Kindling", and "Crow's Curse".