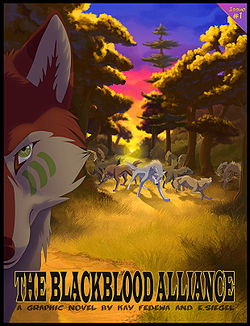 The Blackblood Alliance is a comic by Kay Fedewa and ESDA06. Kay is the creator, writer, illustrator, and colorist of the work, while ESDA06 handles all the background work and assists with composition and dialogue editing as a work for hire.

The Blackblood Alliance Issue #1 was published and put on sale on the official website in November 2007. Signed copies and Swiftkill action figures were sold at Midwest Furfest 2007. Issue #2 began to be posted online in January 2008.

There has been no activity on the official website since May 2011.

As of today, January 17, 2013 there was a post on the official website. It has been known to some members of the art and roleplaying communities that the project was on hold, today her post confirms this. She is currently working on a new project with ESDA06, and The Blackblood Alliance is on the back burner (it's going under a complete reboot regardless).

The following is directly quoted from theblackbloodalliance.com:

""As you may have noticed the BBA comic has not been updated in quite some time. We set the project aside. Im working on a different graphic novel now. When we nest revisit the BBA project we will be starting over fresh with a reboot, which I have already written many ideas and Erin has drawn many concepts for.

We have a new roleplaying/discussion forum. It’s located here.""

The link leads to her new forum, Wild Reign. All connections to the old "BBA Forum" have been severed and it is no longer affiliated with her or her comics.

The comic follows the story of the Blackblood Dire wolves, a race of specially-bred warrior wolves exiled from Inaria, their ancestral home, by their dire wolf brethren. The decision is soon regretted when sabretoothed cats, the dire wolves' ancient enemies, threaten to wipe out the peaceful wolf pack. Desperate for assistance, the very Alpha who banished them sends scouts to call back the Blackbloods. However after such a bitter departure, it's uncertain whether the legendary wolves would forgive their former packmates and come back for assistance.

Swiftkill, the former Captain of the Blackbloods, gives the scouts the full story of their exile, revealing that the true treachery and betrayal (which caused their exile) was all due to the Alphas' envious daughter Rapier. The scouts' pleas for aid are met with rejection by Swiftkill, although hope for retribution encourages other Blackbloods to consider helping Inaria. The story thus far follows this struggle.

Wild Reign is Kay's new text based roleplaying forum, also sharing the name with a future project of hers. While the forum has no direct relation with "The Blackblood Alliance" comic, it does allow members to play canons from the novel and Blackblood Dires around the forum.