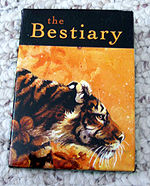 The Bestiary is a limited-edition set of playing cards. The cards feature 54 animal species in a variety of styles by 33 artists. Only 750 individually-numbered sets were made.

The sets were distributed between the participating artists. The cards are sold directly, typically for a retail price of $28 plus shipping. Several artists have already sold out as of March 2006, the edition is almost sold out as of February 2007.

The project was organized by Foxfeather, Gatcat and Kenket (who also created the cover art). It debuted at Further Confusion 2006.

Did you know? Kenket's original name for the project was "Bestiary: The Shuffling"[1]