"The Autumnlands" is a 14 volume science fantasy comic book written by Kurt Busiek. 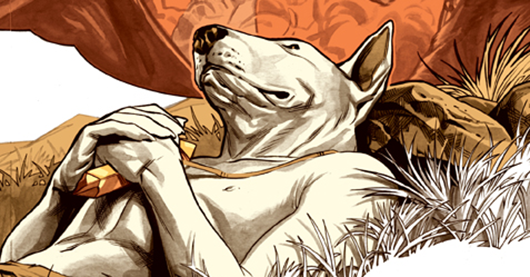 It follows the adventures of several characters - anthropomorhic animal denizens of a floating city, in the days prior to and following the collapse of the city. This sets off a quest all centering around a supposed mystical warrior from ages past. But once summoned, this warrior may not be exactly what they had expected. The artwork features intricate fantasy designs, as well as exquisite attention to detail of the various furry races in the world of the comic. There are dogs, owls, foxes, and others. Not all species are friendly, however. Especially those who do not get the privilege of living in one of the floating cities in the sky.

It was published by Image Comics, from 2015 to 2017. From Image: "When the wizards of the Autumnlands reach through time to bring back a legendary hero, they don’t get the savior they expected. But in a shattered, besieged city, he’s their only hope of survival—and possibly their entire world’s, as well."[1]