From WikiFur, the furry encyclopedia.
Jump to: navigation, search
Culture > Movies > The Aristocats 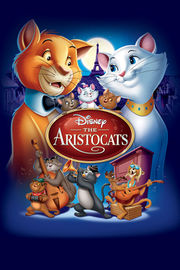 The Aristocats is a movie made in 1970 by Walt Disney Productions, it is an animated romantic comedy film and it was released by Buena Vista Distribution.

The main characters are a family of aristocratic cats, and an alley cat that begins to help them after seeing the mother of the family, who was a very attractive cat for him.

The problems starts when a butler kidnap the family of cats when they were sleeping to gain his mistress's fortune which was given to go to them. When the family returns the butler puts them in a sack with intentions to send them to Timbuktu, but their friends help them to escape.