The Adventures of Captain Jack 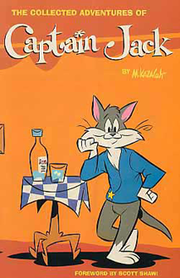 The Adventures of Captain Jack is a funny animal comic book created by animator Mike Kazaleh, and published by Fantagraphics Books. It about the misadventures of a shady private starship captain, and his misfit crew.

The series was enhanced by Kazelah's smooth, animation-influenced artwork, reminiscent in style to that of Chuck Jones.

The crew's adventures have included encounters with a crazy wizard and his giant pinball machine, the farm planet of Janet's father, Herman's near-death experience (where God is shown to actually be the almighty dollar), the attempted rescue of lost astronaut Stanley Tomcat (who doesn't want to be rescued), a planet of TV-hating housewives, and more.

The comic's characters include Captain Jack, the self-assured, gray-furred cat captain of the starship Glass Onion; Herman Feldman, crewmember dog (who actually likes "space food"); Beezlebub (sic), Herman's tiny, demonic sidekick (who is invisible to the rest of the cast); and Adam Fink, an android dog who usually gets stuck with the heavy lifting. Later, they are joined by Janet (a raccoon), a farmer's daughter who falls in love with Herman, and vice versa.