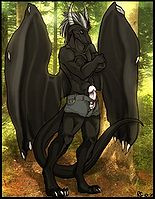 Tharamir (full name Tharamir Drakanine) is a full-blooded dragon who was born right in the middle of a triple supernova which took place in the sky exactly at the time of his birth. The resulting phenomena was a massive black hole the like of which has never been seen before. This massive amount of power was a small example of the potential this dragon would one day have.

Tharamir is very tall, standing at a huge height of forty feet when he is among his own kind but amongst other furs he still stands at a great height of eight feet. His only coloration other than black are his golden eyes and the silver coloring along his mane, horns, and claws. Tharamir has a massive build and a rock-solid framework of muscle along his entire body from his horns all the way to the tip of his tail.

The black dragon Tharamir was born and raised on the Elemental Mountains of Nevershroud where both of his parents raised him as one of the most powerful dragons mentally, physically, and of course magically. He was the best of his kind and both of his parents (Thorakine and Andrimidine) thanked the dragon lords for their blessing of their powerful son. He is currently in his early twenties which is very young for a dragon to be so powerful. Tharamir has attracted all kinds of species and genders so he takes anything that appeals to him at the time. He still continues to think about a serious relationship with someone but as yet is not interested. He is a powerful sorcerer and dragon and his talents also transfer to being a passionate, sexy, and charming dragon that would make anyone want to get to know him better when they lay eyes on him.