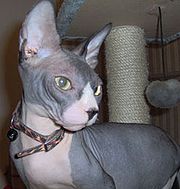 Tetonka (real name Matthew V.; born January 6, 1987) is a furry who lives in Edmonton, Alberta, Canada. His fursona is a Sphynx cat.

Tetonka joined the furry fandom in January 2009, though he had known about it long before that. His fursona was inspired by his grandmother's Sphynx Cat, "Meeps". They had a close connection and he thought it the perfect animal to be.

History of the Name[edit]

The name Tetonka, comes from the Native Americans which means Buffalo. the names History to Tetonka was this. his friend had a dog named Tetonka that ended up passing away from cancer. which he fell in love with the name.Tetonka then started helping take stray dogs off the streets and felt connected to this Labrador Retriever that he rescued which was shot in the back of the leg, and the leg had to be removed. Tetonka named him of course Tetonka. Tetonka the dog never made it thru the Surgry but remainds in many hearts, mostly Tetonkas. 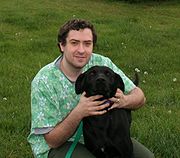 Tetonka with Tetonka the dog

Life outside the Furry Fandom[edit]

Tetonka is a registered Veterinarian Technician, but currently works in retail. he currently lives by himself. and is single. as of lately his world has been the Fandom itself. he enjoys animals, photography and of course the outdoors.