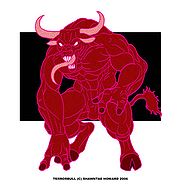 Once a humanimal elite Tracker, Terrorbull loved bringing misery and pain to those he helped hunt down. A natural born bully that met his untimely death at the hands of Catrina "Vague" Fela when he murdered her family in front of her. But little did she or he know that his psionic powers, fulled by his hate, kept his mental self alive in his blood. When Catrina was forced to drink his blood as a sign of loyalty, his essense was transfered into her body and he over time gained control of the young female. Now living as a psyche parasite, he can influenced and gain limited amounts of mental control over the body of his host and can transfer his essense through blood on blood contact.

Terrorbull was ultimately defeated and extracted from the mind of Catrina and seemingly destroyed in the psychic plane by Catrina which freed Terrorbull's hold on Forcewave's body.