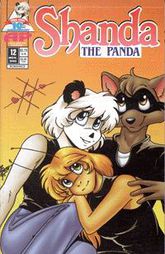 Cover of Shanda the Panda #12 by Terrie Smith

She has been creating art for as long as she has been a member for the fandom. In addition to her professional work, she has created work in many fandom genres, producing prints, con badges, comics, and fanzines. She is most noted for pin-ups of anthropomorphic characters. She also published Little Paw in the late 1990's with MU press out of Seattle, Wa.

Some of her early work involved drawing centaurs for the Barr Wars and Centaurs Gatherum. The Bestiary's Terrie Smith Does Art Special was published in 1989.

Her most famous creation is Chester, a bisexual ringtail who appears in Tales of the Tai-Pan Universe, Midnight Sonata and in Havoc Inc.

Terrie Smith is credited on Inherit the Earth, a furry video-game.

Terrie Smith was a guest of honor at ConFurence 5, held in 1994. Terrie was slated to be Art Track Guest of Honor at Rocky Mountain Fur Con 2009.

There was a page for Terrie Smith in the Artist Passport which was available at Further Confusion 2002.