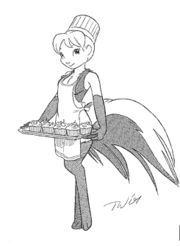 Teh Langgi are an extraterrestrial race created by Taral Wayne within his Willow Run setting. The archetypical Teh Langgi character is Tangelwedsibel.

Teh Langgi superficially resemble humanoid skunks because of their tail and black and white fur, although they resent such comparisons. A better terrestrial analogy would be to furry bipedal dinosaurs (they are digitigrade). Teh Langgi are only one of a number of species belonging to the intersteller community known as Dalmirin.

The Teh Langgi are a migratory species of bipeds. On their planet, all higher species are either hoppers or runners, but otherwise bipedal at least some of the time The Teh Langgi are runners, and spend most of their time moving from place to place in large clans. At the end of each migration they come to a town or city, which has been vacated by prior arrangement with another clan who has just left on their migration. Each clan remains in an urban setting for a part of the year to repair clothing, replace broken goods, and prepare food for their next journey. While they possess an aptitude for technical learning and are good with their hands, the Teh Langgi had not progressed behind an early bronze-age technology before they were discovered by the Dalmirin civilization.

It is not uncommon for small clans to save and charter passage to other worlds. It was by such means that Tangelwedsibel's clan came to Earth, settling originally in Europe. (Where they adopted a fractured form of several languages, including English.) Europe turned out to be somewhat crowded for a race that spends much of its life running, so after a time the clan relocated to North America.