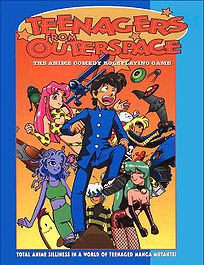 Teenagers From Outer Space (often called TFOS for short) is a tabletop comedic D6 roleplaying game created by Talsorian Games in 1987. The game's focus lies in a fictional world where humans and aliens go to school together, although the aliens have superhuman powers and insanity is the norm. Unlike the name though, the game does allow human characters to be created.

Talsorian Games produced TFOS for a few years, releasing at least two or three expansion sets. They later sold licenses for future expansion packs to A2 Press, a company that continues to produce new rulebook expansion sets to this day.

Third parties have also become interested in the game, even forming a MUX based off this game as well as a few communities.

The game carries with it no concrete background, although the general storyline that started the series was the premise that the universe was a very boring place. Alien teenagers, in their search for some interesting places to go, came across Earth and saw how cool everything was. Soon after, the first landing occurred and families of aliens swarmed the place. Alien teenagers started hanging out at the mall, living next door, and even going to school (at their parents' insistence and the displeasure of all teens, even human teens). 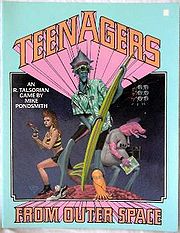 The series has carried several persistent elements with it through its lifetime: The aliens in the game commonly have superpowers; there are common locations such as school and the mall; and there is a group of authority figures called the Alien Control Officers (ACO for short. They are similar to the MIB). Money and jobs also regularly feature in plots, as does the presence of alcohol. Comedy is and always has been the central theme of the series, to a level where nearly every plot should be comedic in some manner. To this end, it has been stated that Weird Al's Dare to be Stupid single sums up the emphasis for behavior in the game's world.

One common rule that has always been in each expansion set has become an element, although it isn't seen much. This rule is that as hormonal as the characters can get, nothing can nor ever will get hot and spicy enough to ruin the comedic value of the game. In short, there is no sex in the game. Period. Or exploring a partner's body. If at any time such a setup is attempted, the GM will always find a way to break it up, such as having the rug get up and walk between the two hormonal teens so as to call out for pizza, or having the ACO make an unwanted visit. Whatever the method, no steamy scenes can occur in the game environment without being cooled off very quickly by GM intervention.

Another element is the presence of a basic set of items (called Gadgets in the game) that no teenager (called a teener) can do without having (that is not to say that they have to have the entire set, only that one or two is usually present in a player's inventory). For example, a cell phone or a goop gun.

The last and most important element is that because of the comedy theme, no character can die. Instead, they get "bonked out" (Bonk is the game's term for a hit point; 1 Bonk is equal to 1HP), or simply knocked out for a certain amount of turns depending on how hard the character is hit. During this downtime, the other players can do any number of ridiculous things to the character from dressing it up as the opposite gender (if applicable) to sticking it in a locker or something even more outrageous.

Tommy Tanaka dove under his desk as the Disco Dwarves From Dimension X teleported with a "pop" into the Homeroom. Zap rays sizzled overhead, vaporizing his English Is Fun textbook and scorching one of the slower freshmen nearby. There was a sound like tearing rubber as, in the corner, Vilar Monstered Out to his full thirteen feet-two and began throwing desks around. Cano started to shapechange, but a stray bolt from a Boy/Girl gun turned him into a cute blonde Cannette.

Rami cringed behind her desk, her saucer-sized eyes wide with mindless terror (actually, everything about Rami was mindless), the tip of her long fluffy tail stuffed in her mouth. "What do we do now?" she wailed at Tommy. "No problem," said Kev, pulling the pin on his Weird Science 101 project and lofting it casually toward the Dwarves. There was a thunderous paisley explosion and the room was suddenly filled with hot buttered popcorn.... - TFOS Volume 1