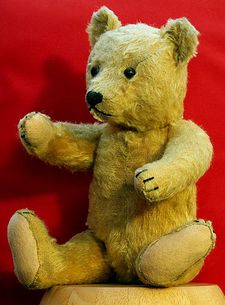 A Teddy Bear, also known as teddy is a stuffed bear-like Plush toy.

Their name was given to them by 26th President of the United States, Theodore Roosevelt after a long day of hunting bears but of no success. His maids made him a stuffed bear toy made out of scraps and rags around the house. But when they finally did catch a bear, his daughter named it "Teddy" (Roosevelt's nickname) and the name caught on.

Among the most popular manufacturer of teddy bears today is the Vermont Teddy Bear Company.

Some individuals in the Furry fandom have anthropomorphic teddy bear characters, often tying in with the plushophile aspect.