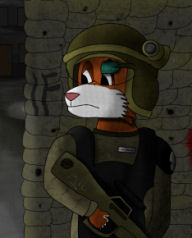 Art from summer 2006.
Kuzzy (real name Martin, born 1988) is an amateur furry artist, novelist and roleplayer who resides in the central part of Stockholm, Sweden. Kuzzy is also a babyfur and his main fursona is an anthropomorphic lion cub who closely resemblances Disney's Simba. He is sometimes seen drawing his real life self as a fox, often in conjunction with RL events.

Kuzzy first appeared in the furry community in early 2001, then aged 13. His first appearances consisted of a few posts on babyfur forums, and numerous visits to FurryMUCK as a guest. In late 2003 he decided to finally make himself a stationary account on FurryMUCK, his first character becoming what now is his current fursona, Kuzzy Kia. He has since written a lot of anthro-inspired short stories, some of which tell his characters' backgrounds.

Kuzzy's contribution to the furry art community started in late 2005 when he joined deviantART and grew a stable interest for anthropomorphic art. His first stumbling steps were a few sketches of his fursona, which he did after not having enough money to commission a professional artist.

Kuzzy's art has developed into military-influenced themes, and he considers himself to be a part of Soviet Furs, with focus on World War 2 and the eastern front. He is also frequently drawing his anthropomorphic family, which includes his two parent characters Tayari Morowskij and Sam Keysan, both officers with the NYPD in a fictional anthropomorphic New York, and their adopted son Kuzzy Kia. Tayari Morowskij - 2006.
Officer Tayari "Tasha" Morowskij is a cheetah character created by Kuzzy. A police officer in a fictional anthropomorphic New York that the author has created, she is the foster parent of the authors main babyfur character Kuzzy Kia, and partner to Sam Keysan. She first appeared on Kuzzy's deviantART account in early 2006, and has since been the actor in a few of his short stories and drawings.

Tayari is a hybrid character who is, according to the author, 90% cheetah and 10% wolf. Her only physical difference from a fullblooded cheetah is her ears, which are triangular instead of rounded.

Tayari "Tasha" Morowskij was born in the rural part of the country. Her father is a direct descendant of a Ukraininan family with the same surname. Living through a steady and happy childhood surrounded by farm animals and also by her two little sisters led her to become a caring and sometimes over-exaggerated protector.

Tayari joined the police academy on her 18th birthday, insisting that she would spend her remaining collage time studying with the academy. She was soon known for her somewhat overprotective opinions, but also for her realistic view on the related subjects.

Tayari hit the streets when she was 20 years old, a little late due to her intense studying. Her first supervisor and partner was Sam Keysan. To this date, they are still on duty together. When she was 22 years old she and Sam adopted their current son, Kuzzy.