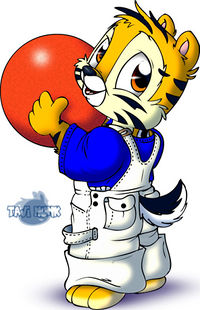 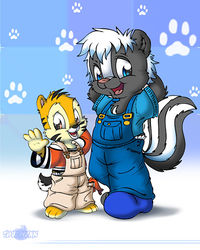 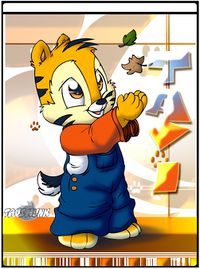 Tavi Munk is an furry artist and babyfur who lives in Birmingham, Alabama, U.S.A.

He's a fun, playful, and at times shy, but upbeat person who's really social and likes making friends, online and IRL. Tavi also loves to chat with others as well as role playing as a little cub wanting some love and fun. He is also an AB. Through it all, he ALWAYS ends up being called 'cute' and it makes him blush.

Tavi, when he can, attends furry conventions, and can be found in the Dealers' Den or the Artist Alley. He can also be found with other babyfurs in the cubhouse, or just socializing on the con premises. As well as occasional furmeets that takes place in local areas.

Tavi Munk's fursona is a 2 year old tiger-chipmunk cub hybrid that's always the cuddly, playful, and loves to scribble and draw. In appearance he looks like a chipmunk, but has the coloration of a tiger; orange fur with a tan tummy, and dark stripes.

Though a cub, he's really adventurous, friendly and outgoing, full of energy, and willing to help others without thinking twice about it. As selfless as he is, Tavi loves affection and is really affectionate, but gets really embarrassed when called cute. And quickly let it be known "he's 'na cute'".

In the joys of cub fun and adventures, the little munk shares it with his little skunk mate named Ozzie Kit Skunk. Ozzie is a bit younger than Tavi, though you wouldn't think this when seeing them together, however he is just as adventurous and curious as this little munk counterpart, but will not venture off without the care n comfort of his tiger chipmunk companion.

He's been drawing since he was 4 and really loves drawing cute, cubby stuff. Tavi's artwork employs both traditional and digital media. His style is a Disney-ish, anime-ish style due to the his passion of the two styles, and working for the Disney Company.

It reflects the joy and fun of childhood and babyhood, using bright colors and warm, innocent expressions and actions. His work is kept at a G-PG level and won't go further than such. He does draw furry art that ranges up to the adult fur age, but mainly focuses on the cub age level overall.

Most art Tavi does are very colorful pictures illustrating cubs at play, being social, in a babyish pose, or with a caretaker. He also makes badges for furry cons known as Tavi Tags for furs to wear or have as a collector's item, with the client's fursona drawn in his style.

Aside from pictures and badge, Tavi makes cub comics at times. They mainly revolve around adventures a cub or a group of cubs have. In addition to his work, Tavi does furry paintings as well. He doesn't do them as much but its a passion he loves to do on canvas.