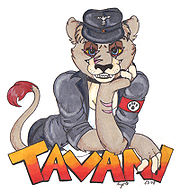 Tavani (formerly known as Cubsy, also uses the name xscarredonex; born June 25th, 1989) is a furry artist and fursuiter from Long Island, New York. Her fursona is a lioness with scar markings. Her fursuit was made in June 2007 by White Wolf and premiered at Anthrocon 2007.

History behind the name[edit]

When Tavani originally joined the furry fandom, she named her character Tavani. However, she also used to name Scarred_Cub as an artist, and gained the nickname Cubsy. From there, in her own words:

...a few people began calling me Cubsy and it stuck. I'll admit, I really dont like the name. At the time, yea whatever but nowdays I want my original identity back.[1]

As of September 2008, Tavani began using her original fursona's name instead of Cubsy.