This article is about the fictional species. For the fursuiter, see Tauren Tom. 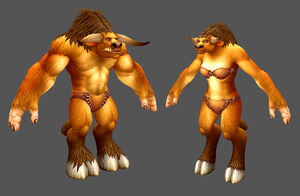 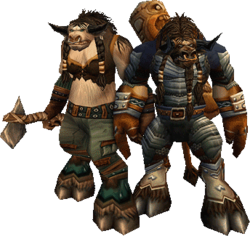 The Tauren are a race of anthropomorphic bovines, and one of the major playable characters, in Activision Blizzard's games Warcraft III and World of Warcraft.

Taurens are huge bipedal anthropomorphic bovines, in appearance resembling the Minotaur of Greek mythology. They weigh almost half a ton and can grow up to 12 ft tall. Their name is an anagram for "nature", as well as a reference to the constellation Taurus the bull.

Original concept art shows them with three fingers and a thumb, and the models in Warcraft III seem to reflect this.

However, in World of Warcraft, Tauren were given thick forearms with two fingers and a thumb.

In Warcraft III, the icon for Warstomp, a Tauren ability, shows a single-toed hoof, far more akin to a horse's foot than a cow's.

However, the models in the game do show cloven hooves, more like Earth cows.

In World of Warcraft, the foot structure changed again, making the Tauren flat footed (unlike real cows) and rounding the tips of their hooves considerably.

Sexual dimorphism is present in the species, with the males being eight feet tall with an enormous, muscular build. Females are shorter and more delicately built, with smaller horns, but are still massive and muscular when compared to other races. 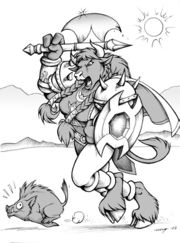 A Female Tauren, as drawn by Dustmeat.

They are a popularly chosen species amongst furry players due that they were the only initial playable anthro characters in the game until the introduction of the Worgen in the WoW's expansion pack Cataclysm, and the addition of the Pandaren in the 2012 Mists of Pandaria pack.