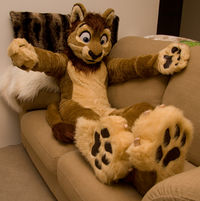 Taubu's fursona is a lion which developed from an interest in the Lion King fandom starting in 1998. He discovered the furry fandom in 2001, whilst browsing for Lion King sites and it quickly became his new found interest. After being in the furry closet for a few years, Taubu decided to become more active in 2006.

In 2016, Taubu was part of the committee for the organisation of FurDU.