Taral Wayne (real name Wayne MacDonald; born October 12, 1951, in Toronto, Ontario)[1][2] is an artist from Ontario, Canada with a career extending as far back as the pre-furry APA Vootie.

His art has been featured in Gallery and in the comic Tales of Beatrix Farmer, and was nominated for a Hugo Award eleven times for his illustration in science fiction fanzines. The most recent of these nominations is for the 2010 Worldcon in Reno, Nevada.

He was a guest of honor at ConFurence 3 (1992) and was honored as the Fan Guest of Honour at Anticipation, the 2009 Worldcon in Montreal. In 2008 he was awarded the Rotsler Award for his long-time artistic achievement in amateur publications of the science fiction community by the Los Angeles Science Fantasy Society. He was in 2011 named the first recipient of the Canadian Fanzine Fanac Award as Best Canadian Fanartist.

He produces consistent and refined line art, depicting figures in a stylized and rounded bande dessinée style. Taral has also had a modest career illustrating books, magazines, and any other sort of kipple that makes him a buck. Extensive selections of his art and writing can be found on Fur Affinity and deviantART.

Many of his characters and the associated art are set in or around a fictional small town called Willow Run. His signature characters are a blue and white furred, silver eyed alien girl named Saara Mar, and another extraterrestrial girl named Tangel' (short for Tangelwedsibel, a Teh Langgi girl featuring in a large number of drawings by Taral Wayne. She somewhat resembles a black and white furry dinosaur and hates being called a skunk.

Saara's culture possesses technology that goes beyond the Arthur C. Clarke quote about "appearing like magic"; it may even appear like a cartoon. The artist has especially delighted in creating detailed environments in his work, whether natural, urban or indoors. The art often includes a high degree of inter-connectedness and self-reference. 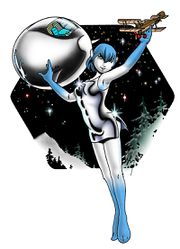 Saara Mar is the creation and protégé of sorts of Canadian artist Taral Wayne, and dates back to his earliest work in the 1970's. She is a Kjola, an extraterrestrial, representing a species so fantastically advanced in science that her powers seem less like magic (as per Arthur C. Clarke's observation), they seem more like cartoons (as per Taral). One might go so far as to say she isn't a natural species at all, but a quantum powered, synthetic, solid-state being animated by force fields, yet nevertheless a very sympathetic human personality for all that. She "discovered" the Earth in April 1970, her first contact by some strange coincidence the artist...

Among her non-human friends is Tangelwedsibel. Tangel' is a Teh Langgi, a different species of extraterrestrial that somewhat resembles a skunk because of their tail and black and white fur. Naturally, Tangel resents being reminded of it. Teh Langgi are only one of a number of species belonging to the intersteller community known as Dalmirin.