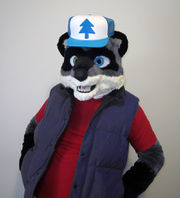 Tanuki Gokuhi or just Nuki (born in São Paulo, Brazil), is a furry writer and fursuiter who lives in Toronto, Ontario, Canada since 2009.

Tanuki owns a fursuit based on his own character, Tanuki Gokuhi. The main theme is a firefighter, but the clothing changes on the occasion.

He is an enthusiast writer, and while not having anything physically published he actively writes short digital stories, and worked together with Tempe O'Kun to translate into Portuguese a Digital webcomic called Sixes Wild: The Bluff, on sale on Amazon.[1]