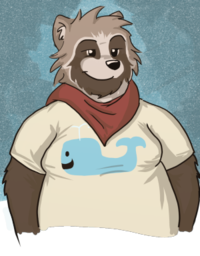 An example of a furry depiction of a tanuki. (The fursona of Tanukisan)

Tanuki (タヌキ or 狸) is often mistakenly translated as raccoon or badger, but is in fact, a raccoon dog (Nyctereutes procyonoides) a distinct canid species native to Japan, China, Korea and southeastern Siberia. Tanuki have been part of Japanese mythology since ancient times. The mythical tanuki is reputed to be mischievous and jolly, a master of disguise and shapeshifting, but somewhat gullible and absent-minded.

The current humorous image of tanuki is thought to have been developed during the Kamakura era. The wild tanuki has unusually large testicles, a feature often comically exaggerated in artistic depictions of tanuki. Tanuki may be shown with their testicles flung over their backs like a traveller's pack, or using them as drums. Tanuki are also typically depicted as having large bellies. They may be shown drumming on their bellies instead of their testicles, especially in children's art.

Statues of tanuki can be found outside many Japanese temples and restaurants, especially noodle shops. These statues often wear big, cone-shaped hats and carry bottles of sake in one hand, and a "promissory note" (a bill it never pays), or sometimes an empty purse, in the other hand. Tanuki statues always have a large belly, and contemporary sculptures may or may not show them with the traditional large testicles. These exaggerated features represent fertility and plenty. Called kintama (lit. golden balls, or golden egg; 金玉) in Japanese, the testes are supposedly symbols of good luck rather than overt sexual symbols (the Japanese are more tolerant of low humor than most Western nations).

During the Kamakura and Muromachi eras, some stories began to include more frightening, man-eating tanuki. Other stories report tanuki as being harmless and productive members of society. Several shrines have stories of past priests who were tanuki in disguise. Shapeshifting tanuki are sometimes believed to be a transformation of the souls of household goods that were used for one hundred years or more.

A popular tale known as Bunbuku chagama is about a tanuki who fooled a monk by transforming into a tea-kettle. Another is about a tanuki who tricked a hunter by disguising his arms as tree boughs, until he spread both arms at the same time and fell off the tree. Tanuki are said to cheat merchants with leaves they have magically disguised as paper money. Some stories describe tanuki as using leaves as part of their own shape-shifting magic.

In metalworking, tanuki skins were often used for thinning gold. As a result, tanuki became associated with metal mines and metal craftwork and were marketed as front yard decoration and good luck charm for bringing in prosperity.

While tanuki are prominent in Japanese folklore and proverbs, they were not always distinguished from other animals. In local dialects, tanuki and mujina (狢, kyujitai: 貉) can refer to raccoon dogs or badgers. An animal known as tanuki in one region may be known as mujina in another region. In modern Tokyo standard dialect, tanuki refers to raccoon dogs and anaguma refers to badgers. Regional dishes known as tanuki-jiru ("tanuki soup") may contain either raccoon dog or badger, although the taste of the latter is often preferred.

Originally, the characters for tanuki, 狸 (kyujitai: 貍) were used to refer to other mid-sized mammals, mostly wild cats. [citation needed] Since wild cats live only in limited regions of Japan (e.g. Iriomote, Okinawa), it is believed that the characters began to be used to mean "tanuki" instead starting around the Japanese feudal era. This shift in meaning, along with the rarity of the raccoon dog outside Japan, may have contributed to confusion over the proper translation of "tanuki" into other languages.