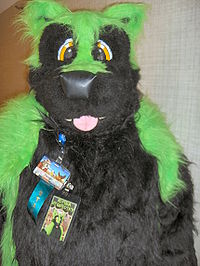 Tango as Rumba Neonhusky at Anthrocon 2006.

Tango is a fursuiter who serves on staff for Anthrocon and Midwest Furfest. He was also staff for Technicon for several years. When not doing his best to keep everyone else happy, he enjoys RPGs (both platform and pen and paper variants); card, board, and strategy games; reading science fiction and fantasy, reading comics, watching TV, and writing.

Formerly a Hospitality and Tourism Management major at Virginia Tech, where he helped found SOAP, Tango quit his job with Echostar/Dish Network in May of 2006 to move to the DC Metro area and live with his boyfriend. He currently works as a help desk lead for an IT solutions company specializing in government contracting.

At Anthrocon 2007, Tango made a bet with Uncle Kage: if Tango could lose 100 pounds before Anthrocon 2008, Kage would go without alcohol for the entire con[1]. While Tango did not win the bet, he continues to work on losing weight.

Tango the character is a half husky, half wolf hybrid. There have been several variations of him; two are most common.

Tango the Wild Mage is a pure story character. He tends to be between 6' and 6'7" in height and is always digitigrade. His eyes are typically portrayed as purple or orange, though have been blue, green, and turquoise. His ears and tail tend be be very expressive. His powers are those that nature uses to restore natural order and he tends to use lightning, electricity, and plasma among other unstable forces in his spells and magic. Sometimes he holds the title of "The Wild Dream." Tango is rarely more than twenty-five years old and can be as young as fifteen in this variation.

Tango the non-magical is your average husky-wolf half-breed with a swimmer's build and gymnastic abilities. While not overtly athletic, he likes to think there's not a whole lot he can't do. This variation of Tango is almost always twenty to twenty-five years old and dressed in khaki carpenter or cargo shorts and a white vest featuring a wildburst.

Both variants of Tango are digitigrade and generally do not wear shoes of any form.